A very twisted young man has made headlines all across the nation as he dons a wig and a dress, then insists on using the girls locker room and the girls restroom at Hillsboro High School, Hillsboro, Missouri. This is the school district I live in, and there are things us locals know about him that have not surfaced in the mainstream press. For instance, it is reported that while he presents himself as a transgendered teen, assuming the gender of a girl and using a girls name, “Lila” instead of his given name, “Noah”, he has a girlfriend who has assumed the gender of a boy.

While he  claims in interviews, recently appearing on ABC’s The View, that he does not understand why girls do not want him in the girls bathroom and locker room, saying that his genitals and underwear are only seen for a short second, it is rumored by those who have seen him, that he wears thong underwear under his dress.

Those are rumors, not proven to be true or false. However, without question, this picture of Lila that has recently surfaced, is a far cry from the innocent, persecuted teen girl that he presents himself as when he is being interviewed. Yes indeed, this boy should NEVER be allowed in a girls bathroom in a public school. The image you see in this picture is precisely the reason hundreds of his classmates staged a walk-out to protest his being allowed in the girls locker room. They know the real “Lila”. 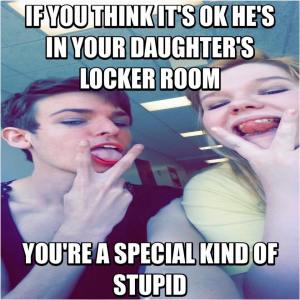 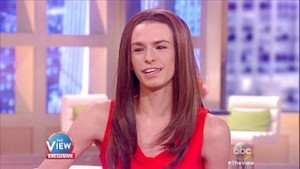